The Princess and The Frog [Ron Clements & John Musker] 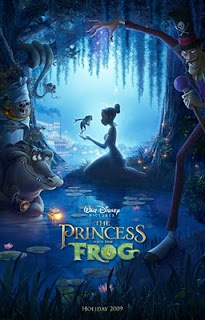 If you have kids at all, I would have no hesitation in recommending The Princess and The Frog (TPATF). It's a short breezy adventure in the classic Disney mold, with a handsome prince, a spunky damsel, assorted animal sidekicks, even the archetype witch...OK, voodoo priest

The film is set in a Jazz era New Orleans, albeit a cleaned up version, where blacks work as servants to whites but are not subjected to any remarkable degree of discrimination, at last so far as the principal characters go. TPATF introduces Disney's first black heroine Tiana, whose ambition is to fulfill her father's dream of opening a classy restaurant (which one suspects few of their neighbors could afford to eat at) and, as she indicates in the zesty art deco inspired ditty “Almost there”, will work no end to reach that aim. The handsome prince is Naveen of fictional Maldonia, recently landed in New Orleans. Naveen leads the high-life and is in consequence dangerously low on funds. He aims to rectify this by marriage to the pampered Charlotte, Tiana's constantly sympathetic friend and daughter of the town's leading moneymaker.

Cue in the film's bad guy and it's most interesting character, Dr. Facilier. A voodoo priest dressed up to resemble Baron Samedi, Facilier snaps his slender bony fingers, turning Naveen into a frog and induces Naveen's disgruntled valet to impersonate him and claim Charlotte's hand, upon which they will share her father's bounty. Naveen in an effort to get rid of the curse mistakes Tiana for a princess and they kiss, turning her into a frog as well.

It's all quite predictable: our frog protagonists must race against time to regain their human form and in the process fall in love, yada yada. The animal sidekicks this time around are a friendly jazz trumpet-playing crocodile named Louis (in capital letters, REFERENCE) and a jive-talking firefly mistakenly infatuated with a star.

So yes, no surprises here, but keep your expectations child-high and the film delivers. The return to 2D warms the cockles of this nostalgic fan and the film's settings, be it the flashy town with its gaudy nightclubs and mardi gras parades or the night-shaded bayou swamps, allow for Disney's artists to whip up rich backgrounds and amazing riots of color and movement and shadow. The best example of their artistry is Facilier's song “Friends on the other side”; it is for me the film's outstanding moment. It also helps that Facilier himself is an awesomely etched character, falling only a little short in the eeriness department of Maleficent from Sleeping Beauty.

The film is sadly tamer than the classic Disney films it aims to evoke. After pre-emptive protests from pressure groups, Disney dropped the race card and there is no indication that Afro-Americans at the time then had any less rights than their Caucasian counterparts, making Tiana's struggle an entirely personal one; but the catch is, she's not interesting enough as a person for adult audiences to care about what happens to her. It would have been a nice counterpart if Naveen had been a black African prince with a humiliated white serf but that's not happening either. Actually most characters apart from Facilier have been painted with a pleasant but unmemorable brush. Even the illustrators seem to have been instructed to trim the scare elements (like the spirits raised by Facilier to help achieve his ends) in their work, mixing in cheerful colors and reducing darkness levels to keep things within the kiddies' “comfort zone”. All this toning down is a little disappointing because Disney classics like The Fox & The Hound had some poignant moments drawn from the characters' struggle with their role in the world, and I can attest that the moodily lit scene in Sleeping Beauty where Maleficent draws an entranced Belle into activating the curse still creeps me out.

But with its thankfully limited number of songs, frequently eye-popping visual chutzpah and a breezy pace with little downtime, TPATF will delight the kids without putting off their parents much.
Posted by Suresh S