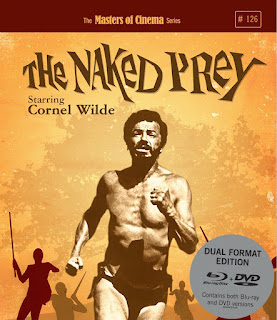 Today I saw The Naked Prey on Eureka's blu-ray.

I got interested in the film when I read the synopsis, which reminded of Mel Gibson's Apocalypto, a film I tremendously enjoyed. Sure enough, actor-director Cornel Wilde's survival drama looks to me a precursor to the later film, even if it is not as relentless and kinetically propulsive. Here Man (specifically White Man, played by an incredibly well-built Wilde), originally part of a hunting party whose arrogant and trigger-happy client refuses to pay tribute to a local tribe and avoid trouble, is given chase in the African wilds by a tribe of native warriors out for his blood.

Apart from a few lines in the beginning, the film is entirely lacking in English dialog and none of the lines spoken by the African characters are translated, putting this film squarely in the perspective of the white man. The cat and mouse games played between Wilde and the natives are pretty well depicted, apart from clumsy heavy-handed symbolism in the form of cuts to instances of animal fighting. These hamper the pace, are mostly taken from stock / second-unit footage and even have a different look depending on the source (sometimes 16mm). But the bulk of the movie remains engaging, and the visuals are supported by a throbbing percussion based score and native chanting/singing, which keeps you rooted in the setting.

The blu-ray gives a solid presentation of the film. Color range seems limited by the setting of the film (heavily skewed towards browns) and it doesn't look as robust as films with recent restorations, but quite good on the whole (except obviously when compromised stock footage is used). The LPCM mono track does a fine job of bringing the action, especially the aforementioned percussion score. The on-disc extra of note is a video essay by Sheldon Hall, who briefly discusses Cornel Wilde's career and dives into the specifics of the making of this film. For someone like me, who had not previously heard of the actor, there is a wealth of information and interesting anecdotes here, very worthwhile sitting through.
Posted by Suresh S