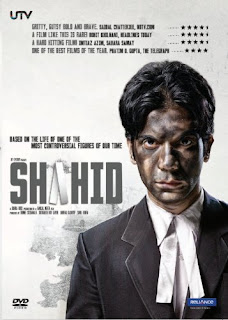 Rather late in the day, but last night I watched Shahid, director Hansal Mehta's film on activist lawyer Shahid Azmi, who defended several people accused of terrorist activities till his murder.

After the '93 riots in Mumbai, the young Shahid went off to join a Pakistani militant training camp, but returned soon after. The film implies that is after he is made to watch the ritual killing of a man - I find it hard to believe that the trainers would waste time teaching their recruits assault rifle combat before showing them cold blooded murder to weed out the timid. Anyhow, shortly after Shahid's return he is arrested by the Mumbai police under the TADA act and forced to confess his involvement in a terrorist plot, after which he spends time in Tihar jail. Here he meets black & white examples of extremist and moderate Muslims and aligns with the moderates, in the process studying for law. After he is released he practices law, and becomes the messiah for underprivileged people picked up for terrorism allegations and kept in prison while investigations stretch on for years. For this he faces threat calls and even public attacks from political / criminal outfits. Somewhere in the midst is an awkwardly played out romance story with a lady client for whom he fights a property case, then marries.

Shahid is a good film, although it suffers some in execution because of a perceived need to soften and simplify. Namby-pamby songs and musical cues unnecessarily try to direct your attention. While it is based on true events, the script appears to simplify people and events to the point of contrivance. On the other hand, it is definitely a work of passion. The performances are solid (Rajkummar Rao, then known simply as Raj Kumar, holds center-stage and makes it worth your while to gloss over the film's shortcomings, but the supporting cast is also strong), production design is intricate without being obtrusive and director Mehta helms the affair quite well. Worth watching at least once.

Reliance's DVD is terrific in terms of the presentation - image quality is as good as an SD presentation of a digitally shot film gets. The color grading is excellent, generating mood without going overboard. Sound is good too, with very good separation and incorporation of ambient noises (An early scene of the riots is a great showcase). The sole extra is an extended version of Shahid's trip to the militant camp.
Posted by Suresh S