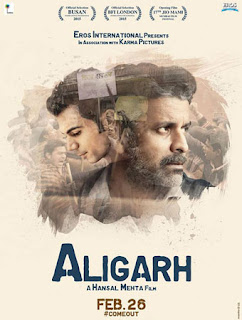 Aligarh is Hansal Mehta's attempt to depict the tragedy of an AMU professor Shrinivas Ramachandra Siras (Manoj Bajpayee) who was illicitly filmed indulging in a consensual sexual act with a rickshaw puller, hazed into admitting guilt, and subsequently suspended by the authorities and pilloried by shrill conservatives for immoral behaviour.

The script travels two paths. The first is external, the struggle to restore Siras' position and dignity through the press, in which he is supported by journalist Deepu Sebastian (Rajkummar Rao), and through legal procedure (in the wake of the landmark 2009 Delhi High Court judgement which amended section 377 of the Indian Penal Code to decriminalize homosexuality, subsequently reversed by the Supreme court in 2013, in who-knows-what wisdom). The second path is internal, an exploration of the psyche of a lonely outcast. Apart from his closet homosexuality, Siras was a divorcee single man, who taught Marathi in an Urdu dominated institution. Despite this he was appointed Head of the Modern Languages Dept (The film implies this was a motive of jealousy for the sting operation, in which senior university officials seem to have a strong hand).

Mehta displays a genuine sadness and anger towards the tragedy. The collaboration between him and Bajpayee gives us a very moving portrayal of a man who only wanted to be accepted for what he was. Sexual orientation aside, the cruel bias faced by an ageing bachelor in a society where marriage and family are the de facto standard is something that anyone should be able to empathize with. Every moment of his life, Siras feels the burden of being shunned and judged by his peers. It is no wonder then, that even after the Allahabad High Court ruled in his favour, restoring his position and benefits, he committed suicide shortly after (There were some allegations of murder, but nothing was substantiated). While certain elements may seem overly composed and deliberate, the film depicts this aspect with honesty and feeling.

Which is why the portrayal of the legal battle seems unnecessarily shrill. Of course, after Court, typical courtroom dramas will always seem artificial, but Ashish Vidyarthi's smug cockerel act as Siras' lawyer and the general theatrics in this section are at odds with the subtlety depicted elsewhere in the film. Still, Aligarh's core remains strong and the film is a vital protest for acceptance and peaceful inclusion of differences between human beings for us to retain the right to be called a civilization.
Posted by Suresh S