Since the weekend was pretty much the only time I could head out to the cinemas during the ongoing Mumbai Film Festival conducted by the Mumbai Academy of Moving Images (MAMI), I tried to take as best advantage as I could and watched 8 movies over the past 2 days. This year being the 20th Anniversary the organizers significantly lowered the attendee rates to 500 rupees, to (I think) match what they charged for the first event conducted in 1998 (at that time it was a non-sponsored event with no mainstream film industry support, and only a couple of  auditoriums in the city were screening films. The first one for me was notable mainly for it being the premier screening of Malayalam film-maker Adoor Gopalakrishnan's classic Kathapurushan (Man of the Story). The maker himself had come for the screening and gave a small talk afterwards.

Anyhoo, lower rates meant that the number of delegates was going to be significantly larger and pre-booking individual shows over the internet became the equivalent of a train reservation in peak season. Booking for each show started at 8 am on the previous day and within a few minutes at least the talked about movies would be sold out. For the first day (which I didn't attend, it being a Friday), there was a clusterfuck with servers going down due to overwhelming demand. While I got all the shows I was aiming for on Saturday, I had to exercise alternate options for some of the shows on Sunday on account of being pipped to the post.

So on Saturday morning (My Day 1) I landed up at the classic single screen Regal Cinema in town and this is what I watched. 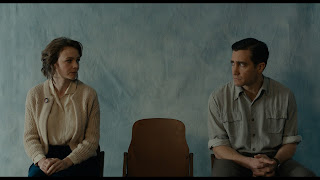 Wildlife (Paul Dano) - Dano's film is a family drama set in 1960. The glamor of the American Dream is slowly peeling off although large scale disillusionment arising from the Vietnam conflict is still a way off. The idyllic close-knit relation between spouses Jake Glylenhaal and Carey Mulligan and their teenage son (Ed Oxenbould) is strained when Jake is fired from his job, and a mix of ego and inertia keep him unemployed. His self-image of provider is threatened when both Carey and Ed take up jobs to put food on the table and he grabs a reckless stint in a wildfire-fighting exercise that takes him away from home. While Ed has faith in his father Carey feels abandoned and does what she can to secure the family's future, including seducing an older client she feels might provide her and Ed with the necessary security. In this chain of events we see erstwhile family bonds straining and bending, with some violent twists towards the end. Wildlife is captured with restraint and quiet attention to detail. Its impact is limited, ironically because of its civility; the script never tries to probe the wound of family discord or seriously discomfit the viewer with the emotional angst of the characters, but with steady direction and strong acting a very respectable effort it is. 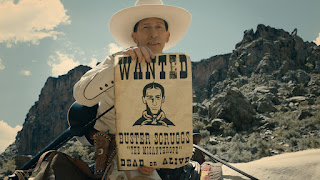 Ballad of Buster Scruggs (Joel and Ethan Coen) - "Please God let this not be some bleak country music fare" I was hoping as I sat down to the new Coens film (co-produced by Netflix so expect to see it at home soon). Well, there is singing, especially in the first vignette of this anthology western, but boring it certainly ain't. In a series of unrelated episodes set in the West represented in old-school Hollywood, the Coens seem to pay tribute to masters like John Ford, Sam Peckinpah, and hell, animator Tex Avery. Over the various courses of this banquet, the tone goes from hilarious to stirring to romantic, even a dash of the macabre. I won't spoil it any more save to say that I enjoyed myself thoroughly and look forward to revisiting it (hopefully on blu-ray). 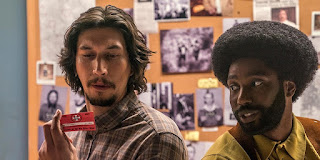 Blackkklansman (Spike Lee) - Based on the true life incident when a black police officer in the 70's (a time of racial tensions and open maltreatment of Afro-Americans) infiltrated the Ku Klux Klan (KKK) with the help of another colleague, a Jew (also hated by the KKK). They acted in tandem as one person, the black cop over the phone and the Jew in person. The premise sounds utterly preposterous, but it apparently happened that way. The film is a mixed bag, essentially trying to make a populist narrative - the blacks in the film are handsome and heroic with a glowing aura around them, while the members of the KKK are shown to be sleazy dumb rednecks. I suspect if Quentin Tarantino had made this film, Spike Lee would have been railing at him for being patronizing towards the struggles of the black movement against white oppression. Unlike (the wholly fictitious) Inglourious Basterds this film is not able to take its incredible narrative and milk its potential to create genuine tension for and empathy with the characters, like the best thrillers do. For me there was only one effective scene, where a veteran black activist (played by singer Harry Belafonte) recounts the shameful incident where black teenager Jesse Washington in 1916, after conviction of rape and sentenced to death, was dragged out by the public and lynched in an ordeal that involved painful mutilation and being burnt to death, cheered by an audience of thousands. The scene in its restraint and humanity carries a power that is missing from the rest of the film.

Since I had opted out of Lars Von Trier's new film, I went for a meal (pizza and salad) and made my way to Liberty cinema for the day's last watch: 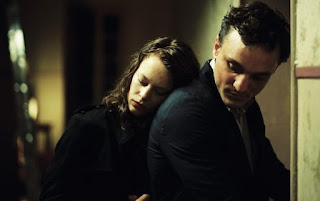 Transit (Christian Petzold) - Petzold's film is based on events set in WW2, but apart from the absence of modern communications technology he doesn't take the trouble to mount the film as a period piece. Franz Rogowski is running from the Nazi authorities in France, taking on the identity of a writer who has been offered asylum in Mexico. His period of waiting and applying for the necessary permits is likened to a passage through purgatory. In this course he meets people he develops emotional attachments with, a young boy looking for a father figure, and the writer's wife who is now in a relationship (of convenience or something deeper?) with another man. With its exploration of identity noir-tinged melodrama, Transit could have been something good (and many professional film critics think it is, so I may be wrong) but I thought its attempt to be this epic romantic tragedy a la Casablanca render it contrived to the point of wincing. The use of a voiceover from another character describing the state of mind of the protagonist and the basis of his actions is such a clunky device, it brings to mind the pointless and excruciatingly detailed flashbacks of the gangster's life provided by the police officer in Once Upon a Time in Mumbai. On the whole I thought this was a load of Casa-bunkum.
Posted by Suresh S