In an interesting coincidence the last film I saw also dealt with historic events during WW2. This time I'm talking about the 1955 war movie The Dam Busters. Quite a good one, it reminded me of David Lean's In Which We Serve (and I learned from the retrospective making of that the director Michael Anderson had assisted Lean on that film). It's a story of quintessential British valor and scientific thinking used to score a tactical victory in 1942 on the Germans by destroying some major dams adjoining their factories and thereby crippling their armament manufacturing capacity. Of course, from the other side, one might think a lot of German factory workers probably died or were rendered homeless in the deluge, but then war as a wholly ethical "soldiers only" enterprise probably never existed. 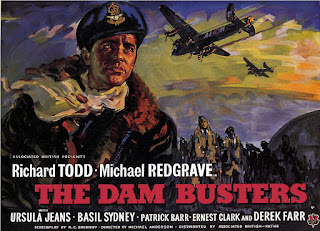 Based on the actual events of Operation Chastise, the film begins with scientist / engineer Barnes Wallis (Michael Redgrave) coming up with the concept of a "bouncing bomb" when dropped from an aircraft in a precise manner would skim over the water (like pitching stones across a pond) and finally slide down next to the dam wall, the consequent explosion causing greater damage than an attempt to directly hit the wall from above. Wallis stakes his reputation on the plan, even resigning from his position before the war administration allots him the necessary facility to scale up and test his idea. The plan involves using a series of air sorties that will repeatedly bounce bombs till the structure breaks, so you have a special squadron of experienced pilots assembled under Guy Gibson (Richard Todd, who was himself a decorated serviceman in the war), who run a series of test missions. There are failures and setbacks till the idea is perfected, barely before it is time for the actual execution (in mid-May, when the tide was highest and the damage from the dam bust expected to be the most).

The film had the support of the British armed forces and Anderson paid a lot of attention to technical detail and authenticity, and thus the scenes of preparation and aerial attack are both credible and thrilling. It also helps that the British war film shows the operation as disciplined team-work and stiff upper lip, and less of swaggering war heroics (apparently Howard Hawks had proposed a script which he sent across to Barnes and others for inputs but they were offended by its tone and did not revert to him). The only niggle is the weak optical effects used to show flak and gunfire in the scenes where the sorties battle German defenses to reach their targets. Against the other elements they look very out of place, although I don't know what they could have done to alleviate it given the budget and technology at their disposal.

OK, just a heads-up in case anyone else goes in to this one blind. There was a language warning before the film opened and disclaimers about prevailing culture, and I didn't realize what it was about till the character of Guy Gibson called out for his dog with the N-word. It is a bit of a shock and one wonders how the Peter Jackson remake that was floated at one point would have addressed it (oh wait, here) but it's historical fact and no way to retrospectively take it out without seriously mutilating the picture.
Posted by Suresh S