About the movie-maker Eric Rohmer, a reliable friend told me, "If you like people talking, then you'll probably like his movies."

From my viewing of The Aviator's Wife (1981), the first in an episodic series of films he titled Comedies and Proverbs (C&P), that certainly feels accurate. It is very conversational in nature, with almost no pure visual or action scene. At the same time, it is not a stage-bound enterprise: many of the conversations take place in real locations / public spaces. In that sense, it is like the well-known Woody Allen films like Manhattan, Annie Hall etc. Of course, Woody was more of a visual stylist, working with skilled cinematographers Gordon Willis and Sven Nykvist. At least this film by Rohmer has a more plain and naturalistic feel, like the cinema vérité. 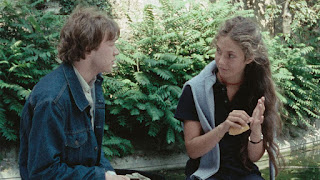 Our protagonist Francois (Philippe Marlaud), an insecure 20 year old in a shaky relationship with Anne (Marie Rivière) a beautiful older woman living by herself, is shaken when he sees her exiting the house with a former flame. Not having the gall to directly ask the girlfriend who treats him with a mixture of pity and contempt, he follows the ex-lover without a clear plan. In the course of this aimless spying, he comes across bubbly 15-year old Lucie (Anne-Laure Meury) who happily falls in with the scheme and even takes charge of the spying. They in turn have conversations where Francois slowly confesses his life to her, and she offers sometimes mocking, sometimes supportive opinions. At the end of the day, Francois visits Anne, who reluctantly lets him in her room, and they have a mini-showdown, in which she expresses her own sadness and frustrations. 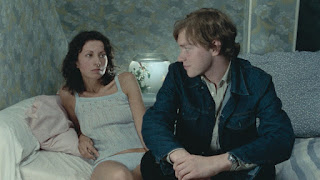 All of this involves a lot of back and forth dialog. Lucky for us then that the writing is both interesting and natural-sounding. The characters feel layered and even when their flaws are exposed - Francois is immature and petty minded, and Anne is quite obviously not interested in any long term companionship with him - they are not caricatured. The Aviator's Wife ends of a note of ambivalent redemption.