#Home can, I suppose, be considered the Malayalam take on how "It's all about loving your parents". 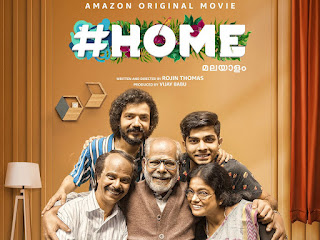 Sreenath Bhasi (Kumbalangi Nights) plays hotshot young film-maker Anthony trying to script his second feature, but struggling with creative block (here attributed mainly to easy distraction from social media). Anthony goes back to the idyll of his parents' home - apart from the indulgent parents, there is a mobility-impaired grandfather and a younger brother who aspires to become a Vlog-Star. The crux of the film is how Bhasi and his brother do not appreciate their mild-mannered, self-effacing father, the colorfully named Oliver Twist (Indrans) who quietly does all manner of things to keep his family happy. Bhasi is more impressed by the flashy achiever father of his fiancee and keeps unfairly comparing the two. The film is also about how Oliver grapples with modern technology to communicate better with his kids and thereby earn their appreciation.

While there is the kernel of a good film there, the final product is really not it. The characters of the sons are shoddily etched – it is possible for children to like their parents without respecting them, but the sons here are shown as barely caring and self-centered to a fault, purely to glorify the unselfish parents (and not in the entertainingly goofy manner of the 80’s Mohan Kumar / Kalpataru / Visu movies). There is a forced insertion of too many social issues the makers want to include (appreciation for parents, older generation struggling with modern tech while current gen is addicted to it) and clumsy "Moshe the Explainer" devices to address them (Indrans' psychologist, who has a ready answer for all his personal issues) .

Shallow as an ad-film for a retirement finance plan (complete with jingle style song numbers), yet stretching to a vegetative 160 min, this one wallows in blandness. There’s one really effective scene where the parents have a showdown with their pampered brats in front of guests; it has an electricity wholly apart from the mildly humorous oatmeal tone the film had up to that point. But after that moment, the script again recedes into mush territory. Too many characters are introduced in a wasteful manner, without giving them enough to do; this seems to mirror the creative block of the main character. The heroic backstory given to the father and how it connects them to other characters is too contrived. And what if he hadn’t had such a backstory? Would the kids be justified in their cavalier behavior? Isn’t unselfish parenthood in itself a heroic act? The makers seem to lack faith in their own idea. The actors are almost uniformly solid (Indrans shines as the mild mannered indulgent father, hoping to be liked by his sons), but the script foundations are too shaky for this #Home to stand up.