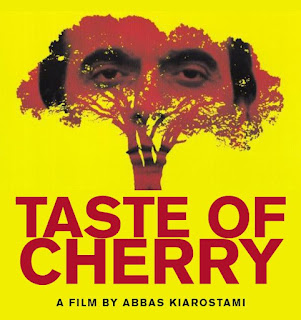 In  Abbas Kiarostami's Taste of Cherry (1997), Houmayun Ershadi plays Mr. Badii, a man who for a good part of the film's beginning we see as a rather suspicious character. He is cruising around in his car, looking to pick up isolated men. At least one of them openly tells him to scram, falling to the obvious conclusion that Mr. Badii is trying to hook up for a gay tryst. But as we learn later he has a different motive.
You see, Mr. Badii has decided to commit suicide; he has even dug his own grave. What he wants is for someone to confirm his death and then spade in earth to bury him. For this he is willing to pay handsomely. He courts in succession a young Kurdish military cadet, an Afghani seminarian, and a taxidermist among others to do this deed for him. He is not interested to explain his reasons or to listen to justifications about why he shouldn't go ahead with his plan. A good part of Kiarostami's film is about the conversations between Mr. Badii and his prospects; how he inveigles himself to put forth his offer, and how they ultimately respond to him.
Taste of Cherry is not so much about being a character study (right up to the end we do not know anything about the life of Mr. Badii and why he wishes to end it) or being laden with symbolic meaning. It is a rhythmic existential film, and what happens at the end is a lot less important than the interludes along the way. This is also not a film for the impatient or plot-focused. I remember, when I first watched it I was fidgeting through the initial part when he is propositioning various men before we know his purpose. I was better placed on the re-visit since I knew the roads it would travel. I am not certain if it was shot that way, but the finished film does suggest an element of improvisation in the dialog and its use of non-experienced actors in pivotal roles. 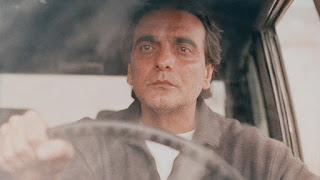 It may not have served as direct inspiration, but the long-range visuals of Badii driving his range rover over the dusty hill paths with a purely diegetic soundtrack may have been in auteur Nuri Ceylan's mind when he conceived the magical Once Upon a Time in Anatolia. In its less ponderous way, Taste of Cherry is also a haunting existential fable.
This is an interesting American trailer for the film that gives almost nothing away about the feel of the actual film:
For those interested, a few words about the recent blu-ray release of Taste of Cherry from Criterion:
My previous viewing of the film was more than a decade ago on the Criterion DVD (gifted by a dear friend). Taste of Cherry was one of the early DVD's in the Criterion label, with a non-anamorphic transfer that was not hugely impressive even at the time of release. Not surprisingly, their blu-ray sourced off a new 4K restoration simply blows away the previous release. There are levels of detail and contrast that were entirely absent on the DVD. While there may be some push of blues towards teal in the grading, it does not take away from the overall superiority of the new master and this is a must-have upgrade for fans of the film. The original Farsi audio is presented as LPCM mono and sounds very clear, with surprising presence for ambient effects. I have not checked the extras as yet but they are definitely more than what was present on the previous DVD.
Posted by Suresh S