Thankfully this un-kvlt blog was never designed to be a trend capturer, or there would be the question of why a 4-year old movie that created a certain splash on release is only being reviewed now. Of course the immediate reason is that I was prompted to finally see it by the glowing reviews of the "bigger, badder" second installment that has made its way to the cinemas now. (See Un-kvlt's impressions of the sequel HERE) 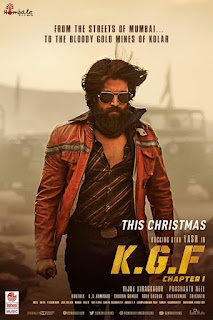 The buzzword in the film industry these days is Pan-India, a product that will work over the entire country, across multiple languages and movie-goer demographics. It first gained traction with S. Rajamouli's ostentatiously mounted 2-parter Bahubali. The 500 crore + India grosses for a film that featured no prominent Bollywood acting talent showed a massive nationwide appetite for its mixture of simplistic old-fashioned narrative and gaudy spectacle, as though the population as a whole was saying that these Fahadh Faasil and Ayushmann Khurana middle-of-the-road ventures are okay to consume as OTT fodder, but when it comes to actually putting money down at the cinemas, give us the archetype larger-than-life movie centered around the HERO that worships his mother, romances the pretty girl and takes on a legion of bad guys while everyone around dutifully drops their jaws in awe.

There is nothing inherently wrong with that sentiment. Some of India's most beloved and enduring films were forged in the smithy of HERO cinema, and movie icons like Amitabh Bachchan, Rajinikant, Subhash Ghai built their careers upon this shrine. More recent entries like the first Dabangg (2010) or 2019's whimsical Avane Srimannarayana pay homage to the formula even as they cannily poke fun at it.  Sincerity of spirit and consistency of tone is what separates the creative gems from the derivative dross.

At least in its first installment, KGF (Kolar Gold Fields) falls somewhere in the middle. What it wants to be is an epic-scope saga of a warrior hero fulfilling his destiny. Born on the same day as the discovery of gold ore in the Kolar region sometime in the 60's, Raja Krishnappa Bairya is orphaned young after the death of a destitute mother who implores him to become a big man at least by his death so he can afford a proper funeral. Like every other Indian movie hero faced with a similar proposition he takes to a life of crime and becomes a high-profile hit-man called Rocky (Yash, already hailed in the credits as 'Rocking Star'). Stealth and subtlety are not the strong points of this assassin who could give Daniel Craig in Casino Royale a complex for sheer swagger. As the supporting characters in the film repeatedly proclaim (this film believes in 'show AND tell'), Rocky can veni-vidi-vici his way through all opposition. Lucky for him then that even the opposition lacks all stealth and subtlety. What he and them have in plenty is beards, such thick bushy affairs that it's hard to believe they are not compensating for something.

By linking its hero to the titular location, KGF provides tangible context to his fate, and Yash's deep-seeing stare suggests a formidable implacability of purpose. A focused narrative that went from his introduction to his being set on the path of his destiny would have made for a solid machismo-worshiping adrenaline rush. But like Gangs of Wasseypur's first installment, KGF-1 decides to temporarily abandon the quest to make time for a romance detour. Until then Yash had impressed as a stoic juggernaut capable of overcoming huge odds with a flick of his slick locks (he seems to be dependent on quick edits and multiple camera angles for his action scenes). But with the entry of the whatsername girl who borrows her fashion sense from Rati Agnihotri in Star, Rocky is reduced to a pedestrian eve-teaser with such genius exchanges as: "How dare you?" "How fair you!" Around a third of the film is wasted on this no-sizzle-all-fizzle-wet-dog-luurrv-angle which has no relevance to the story other than that blockbuster cinema is required to have a romance. There is also the immensely clumsy device of the tale being told by a journalist (Anant Nag slumming it) to a sneering TV anchor after having supposedly written a bare-all book that is being banned by a scared government.

Things get better when KGF finally moves to its main location of the much-heralded gold fields, run with an iron hand by the villains. Rocky infiltrates the setting as a captured worker (Of course, none of the henchmen notice this beefy bouncer type walking tall among the rows of reedy cowed-down slaves). During this period of laying low he observes the exploitation of the workers in the illegal mine. The setting reminds me of the bandit stronghold in Avane Srimannarayana and the secret gold mine in The Mask of Zorro. Like all criminal protagonists in mainstream Indian cinema, Rocky's steely exterior hides a heart of gold and in carrying out his mission of assassinating the current master of the gold fields, he is also facilitating their release. Chapter 1 concludes at a pivotal point, foreshadowing the arrival of fresh adversaries and challenges that await our hero.

Going by the reviews I've read, I am hoping that KGF-2 has more of the good stuff and less of the awkward rubbish that hobbles the first part. My overall recommendation will depend on how that turns out.