For my views on the first chapter of KGF, please click HERE. 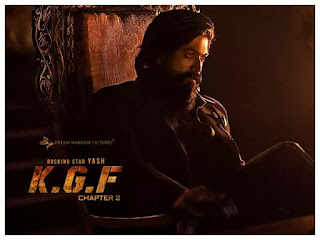 KGF-2 is a continuation of the old-school swagger from the first installment, but taken a few notches higher. Rocky (Yash) is still the uber-badass, dealing out sneering one-liners and sledgehammer fists in equal measure. He now controls the titular gold fields, but in his "More gold! MORE GOLD!" attitude seems to opt for a far less smart plan than the original owners had - I would imagine that part of the perceived value of gold is the fact that it's hard to mine and is made available to the market in limited quantities. Rocky's business sense resembles the guy that slit the belly of the goose laying the (ha!) golden eggs.

But this is not a movie one criticizes for its lack of business sense, or for that matter any other sense. This is a movie where our gangsta hero can:

The large supporting cast is (dur!) cast in that same mold of exaggerated sentiment. Someone actually says with a straight face that the character Sanjay Dutt plays was inspired by Viking culture, and he turns up in the soul-sapping heat draped in chain-mail and leather, and a braid that must take some serious grooming. And beards, beards still rule. Raveena Tandon's PM character would have probably posed a bigger challenge if she sported one. Everyone speaks their lines like theater actors anxious to ensure that their voices carried to the last row.

This is again not a criticism, it is inherent to the film's design. The canvas feels genuinely big, and while the brush strokes are broad, they are also unabashedly virile, with some epic visual moments. You can see that writer-director Prashant Neel wants to pay a Tarantino-like homage to the glory days of Macho Indian Cinema, and when it works, it works really well. On the whole I liked this a good deal more than the sum total of Bahubali.

What I would criticize is the déjà vu occurring over the course of this two-part narrative (with the imminent warning of a third installment). The danger of painting in broad strokes is always that there's not sufficient layer or detailing for the characters. While individual scenes are calculated to raise whoops and whistles (I'm sure this would have been a riot in the cinema hall), there is choppy flow and a lack of connective tissue between scenes - A lengthy symphony cannot be composed solely of overtures, you need to also think of the quieter moments.