Lokesh Kanagaraj’s 2019 adventure Kaithi (Prisoner), in which an ex-convict on the way to meet the daughter he hasn't seen for years is lassoed willy-nilly into rescuing a truckload of poisoned policemen while a battalion of armed thugs (hah!) assault a nearly empty police station, was an entertaining masala film. Despite its length it had focus and an organic build-up of scale. It made you empathize with the main characters so much even the exaggerations towards the end of the film could be taken in stride. 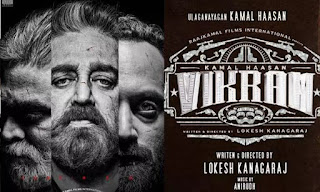 Vikram, while it has tenuous links to the former, is the other way round, so labored and top-heavy it is a disappointing follow-up. The natural flow and interlocking of scenes in Kaithi is replaced by a wobbly narrative struggling to do justice to the star lineup. It launches with full swagger, starting with a ‘mass’ song by ‘Ulaga Nayagan’ Kamalahaasan and then killing him off before the twist that everyone saw coming. There are very few Kamal scenes in which, unless you are a die-hard fan, he doesn’t come across as a twat (some, like the one where he is arguing his ideology are beyond insufferable).

As a drug lord happily popping his own pills with a gang composed entirely of family members, ‘Makkal Selvan’ Vijay Sethupati brings a certain wild energy and humor, but even he seems to be playing a set of Sethupati mannerisms than a consistent character. Fahad Faasil (no title for him yet) as a youngblood covert agent tracking Kamal is reduced to a mostly stereotype Dirty Harry mold. Truth be told, the lead performances are in the main a lot of posturing against obnoxious techno or guitar music. Don't even get me started on a much-hyped cameo appearance that's such rubbish, it made me want to punch the people that thought this was a good idea. 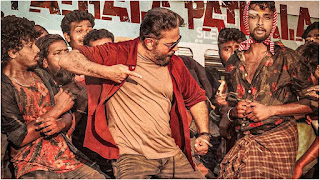 Believability has rarely been the strength of the masala genre, but the flow of the film did not carry me with enough verve to stop the questions coming to mind. Why do the foot soldiers of a multi-billion-rupee drug racket carry only kaththi-koduval (melee) weapons and basic shotguns that are easily neutralized by our heroes? How did Sethupati’s gang become the top drug mafia in the country while being gullible enough to let someone install several kilos of RDX across their entire lair, anyway?

Even the action, Kanagaraj’s strong point in Kaithi, has the same jerky quality as the writing - If a director can't raise tension in a scene where our hero must get past a legion of baddies without disturbing a baby with a weak heart, there are some serious issues in the execution. The lone exception is a bike and car chase sequence somewhere near the mid-point which doles out some thrilling night-time action. The brandishing of the big guns in the climax seems like a rehash of Kaithi's Gatling gun sequence; it's flashier and louder, but still delivers diminishing returns.

If anything, Vikram is proof that all this recent talk about Bollywood films failing compared to Southern ventures because people want "better content" is just BS. Put enough number of marquee names together, add a truckload of fan service, and you can still get away with it. If you want my advice, just watch Kaithi and chuck all this nonsense about a shared universe out the window.