I Start Counting (1970) is basically a Hitchcockian plot by way of kitchen sink realism. Specifically Shadow of a Doubt (1943), in which a young girl suspects her charming uncle of being a murderer, seems to have been in the mind of novelist Audrey Lindop when she wrote the 1966 book that became this movie. 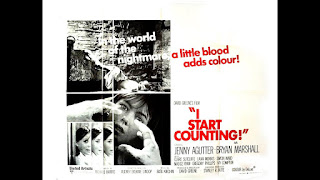 Early teen Wynne (Jenny Agutter) is a adopted Catholic girl in a working class family who have just shifted home, because their old neighborhood is slated to be razed. Despite the mother's warnings she repeatedly visits the abandoned old homestead, finding comfort in old memories. Wynne also has a huge crush on her almost 20-years older stepbrother George (Bryan Marshall). She fantasizes romantic scenes with George and follows him about like an attention-seeking puppy. Her attempts to please him are rewarded by remarks like "You're a funny little biscuit". Wynne's ardor is so dominant that when she becomes suspicious of George being the dreaded serial murderer of young women in the neighborhood, she works to destroy the evidence she finds. This causes some conflict with her Catholic conscience. The other major characters in Wynne's life include her rebellious drug-taking second brother (Gregory Philips) whose collection of newspaper clippings of the killings may be more than idle hobby, and the saucy best friend (Claire Sutcliffe) who may be competition for her crush's attentions.

I Start Counting is not bad as low-key suspense dramas go, and Jenny Agutter shows fine form as the conflicted teen, but I found it underwhelming. Unlike the sensational promise of the posters, there's a tame TV movie feel to it (it's shot on 16mm, I think, and has that grainy diffuse look). The emotions are very on the nose, and it doesn't really grip you or get under your skin the way a Hitchcock film could, when he aimed for that. Helmer David Greene leans on the working class style opting to tamp down the drama. Some visual motifs like the White Rabbit doll on Wynne's bed are interesting (a metaphor for her Alice-like journey through the strange Wonderland of adolescence?), but under-developed. There are no bravura suspense sequences of the level that Hitchcock would have concocted. Basil Kirchin's score is prominent and unusual in its incorporation of sitar and tabla with jazz elements, although sometimes it also distracted me from the on-screen proceedings instead of underlying the action.

A few remarks on the UK blu-ray release from the BFI:

Given the modest production origins, the 2K restoration video on the BFI blu-ray is good. There are, I assume unavoidable, source limitations of brightness and density fluctuations. Audio is generally clear with a bold edge to the score. Optional English SDH subtitles are provided, but they may be on the smaller side for some people. Of the extras, which are plentiful, I have so far only seen the Jenny Agutter interview, in which she talks about her experience of making the film (It was a happy shoot with an enthusiastic director and some very helpful co-actors).

Trivia: Phil Collins has a one-scene appearance as an ice-cream vendor whose entire dialog, when asked if he has Neapolitan Tutti Frutti, is "Eh?"
Posted by Suresh S