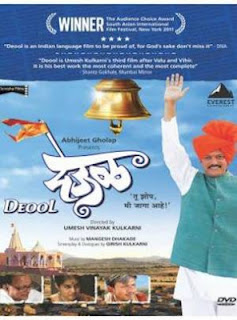 On the whole I did like Deool a good deal more than Umesh Kulkarni's previous effort Valu – The Wild Bull. The comparison is apt because Deool can be seen as almost a follow-up to Valu. It is set in a similar sleepy hamlet where again, an unusual event cascades into a series of actions and consequences. Here the local simpleton Keshav (Girish Kulkarni, who bagged a well-deserved National Award for his role) while resting under a tree, believes that he has had a sighting of Dutta aka Shiva, and dashes through the village announcing it to all and sundry. But not everyone is happy with the news: Social worker Anna (Dilip Prabhavalkar) is a rationalist and the local politician Bhau (Nana Patekar) has been ordered by his higher-ups to convey “Madam's” message of development (no prizes for guessing which party is being referred to). They try to play down the event but the superstitions of the local populace, including Bhau's wife (Sonali Kulkarni, looking more attractive in her plump homely avatar) and the machinations of Bhau's nephew who sees the building of a temple as his way to breaking out of Bhau's stranglehold, take matters all out of proportion.
Like with Valu, the rural setting has been realized very well, and in its way the film raises some pertinent issues about the line between development and commercialism. The building of the temple brings piped water and electricity and prosperity to the village, but renders it a tourist-happy stop that the locals labor to feed off while their fields lie uncultivated. Keshav's faith in his sighting is genuine and he too is initially pleased at the striking changes that Dutta has brought to his erstwhile ignored hamlet, but grows gradually disillusioned at the commercialization of devotion that his neighbors and friends have gotten into in the aftermath of building the temple – It's a shrill but meaningful point that most of them have cut down their actual visits to the deity's sanctum because they're too busy profiting off the faith of visiting pilgrims. It's not absolutely bleak and biting like Billy Wilder's Ace in The Hole, though, and the people behind the temple are not unduly demonized. In a wonderful scene that comes midway into the film, Bhau and Anna have a debate over the legitimacy of the events that have occurred in the wake of the temple and the effect it will have on the place and the people. There is no absolute right or wrong here, and appreciation must be given to the script and the mature performances of the two seasoned actors for walking this fine line.
What keeps me from unreservedly singing this film's praises is its very meandering style, something that I had a greater problem with in Valu. I grant that there is a certain sense to depicting rural life with a slowed down rhythm, but at 2 ½ hours the film gets tedious, has some uneven tonal changes and is not especially richer for it; in fact the impact is diluted by repetition and pointless excursions into too many territories. A good story is one that carefully selects its themes and threads, and does not try to jam in every single idea the writers thought of. There are some more obvious clunkers like a disconnected item song, an ironic addition for a film that talks about exploitative commercialization. But the film is still to be appreciated for its mostly sincere telling of an interesting original story. Here's hoping for more and better from these guys.

P.S. The opening credits sequence featuring "sand paintings" is one of the most charming and creative sequences I have seen. Budding artists will love this.
Posted by Suresh S