...or why it is a piece of classic Bollywood cinema. 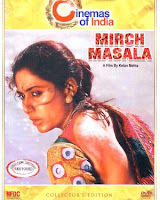 Seeing Mirch Masala again after so many years only reinforces what an amazing achievement this film was, both for Ketan Mehta, and for Indian cinema as a whole. It's downright shameful that a bunch of ignorant people will avoid this film by lumping it in the category of parallel / art film, which by their definition stands for a preachy non-entertaining academic class of movies. Far from it, MM takes from the best traditions of dramatic Hindi movies and theater and stands proudly with any of the beloved classics of Bollywood.
MM goes back to the basics of what all great populist movies should aim for – tell a simple but strong story with well-etched characters and carefully chosen elements of drama, humor and thrills that must not stand as individual “items” but always be in service of the story. As Stephen King once wrote “It's the tale, not he who tells it” (or in the case of films, who directs/acts in it). Mehta pulled this off splendidly in MM, considering how early the film came in his career. His later efforts like Maya Memsaab, and to a far lesser extent Oh Darling Yeh Hai India (my guilty pleasure), had ideas and moments that caught one's interest, but were defeated by the sheer volume of extraneous and awkward elements. Much like with Ramesh Sippy's Sholay, this clarity of vision, this passion, this magic never quite came together for him again.
Set in a pre-independence era village in Gujarat, MM's story is simplicity itself – The evil villain wants to ravish the beautiful heroine (no macho action-happy hero here), and is willing to destroy all that stands in his way. How she heroically evades his clutches, escaping into a chilly pounding factory that generates the titular Mirch Masala, and how he meets his comeuppance makes for the conclusion. This plot could be the backbone of numerous Hindi movies of yore – and if you take the heroine as a metaphor for land or freedom, a far greater number than you may initially imagine. The cunning touch is that MM employs all these tropes – the heroine Sonbai is not only a sensuous but virtuous woman, she is defined by her attitude as a symbol of freedom and self-possession, and the villain's demand for her as a form of 'lagaan' (tax) reinforces the land metaphor.*
It is to MM's strength that the script is rigorous and focused – There are no wedged in “item” songs or disconnected comedy tracks, and all characters and scenes are integral to the plot, playing their role in the sequence of events that lead to the end. The final film runs a little over two hours, not a moment of it wasted. More importantly, its characters believably blend in with the backdrop, and the central archetypes are written strongly enough to be both attention-grabbing and memorable. A wealth of brilliantly honed acting talent from Indian cinema and theater bring MM to credible life. Sonbai remains a defining turn in Smita Patil's career and is a landmark amongst strong heroine characters that had subsided significantly in the wake of the "Angry Young Man" era. Naseeruddin Shah as the lecherous exploitative villain plays to the hilt, bringing the same type of archetypal menace to his role as Bollywood's most memorable bad men. Scenes like Sonbai giving water to the villain after insisting that he get down on his knees, the villain's murderous rage at his gramophone record getting broken and of course the indelible climax where the village women express their fury against the exploiter quite literally by showering him with chilly powder can never be forgotten by anyone that has seen the film.
Technically again, it is astonishing how assured Mehta is in his vision: Frame dissolves (the farewell love-making between Sonbai and her husband, which segues into the morning after where the villain glimpses at the river a now-unguarded Sonbai), slow-motion (introduction to the chilly pounding factory, the climax) and juxtaposing of shots (the villain primping himself for the final assault, while the aged factory guard, who is the film's lone male protector figure, cleans and loads his gun) are used to generate resonant powerful scenes. The sound design for the scene where the villain calls out a one to ten count for Sonbai to hand herself over to him before his men attack takes its cue from an analogous sequence in Sholay. None of this is gimmickry, style rammed in for the sake of style. Mehta has made judicious use of these and other techniques always to carry the story ahead.
In the end what we have in Mirch Masala is not some erudite chamber piece or dry social comment for a small pack of powder-puff intellectuals to politely discuss and feel snobbish about. With its strong archetypes and high voltage emotional moments, it is, in the best traditions of Bollywood, gripping full-blooded drama-music-action entertainment that everyone needs to watch.
* From a certain point the film can also be seen as a portrait of India's exploitation by outside rule and the subsequent revolutionary movement that led to its independence: the chauvinistic class-conscious supporting characters on account of their narrow-minded attitude fall submissive prey to the exploiter, and only those that are able to look beyond themselves and gather en masse in common cause (with one notable exception, all women) are able to confront the evil. Okay, enough with the academic pooh-bah, go back.
Posted by Suresh S