The last movie I watched was Spider-Man: Into the Spider-Verse, to be referred henceforth only as 'Verse. 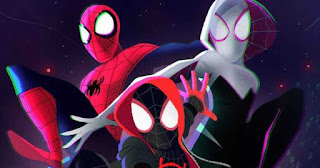 'Verse arose from the curious situation of divided rights between Sony and Marvel for Spider-Man. Apparently Sony retains the TV and digital rights for any Spidey adaptations, and can make solo Spidey films with approval from Marvel. In return, Marvel gets to use Spidey as part of their cash generating MCU juggernaut. After a truncated non-Amazing Spider-Man series 5 years ago, Sony recently mounted Spidey onto cinema again, this time with the help of comedy / animation wunderkids Phil Lord and Chris Miller (Cloudy with a Chance of Meatballs, The Lego Movie).

Unlike every previous Spider-Man feature film adaptation which goes with the best-known "Peter Parker is Spider-Man" timeline, 'Verse gives us Miles Morales (originally introduced in comics in 2011), an awkward school-going Afro-Latino lad who gets the bite. But wait, Peter Parker is here too...more than one...and a host of other Spider-people...including a pig (now that's going the whole hog). You see, the movie's premise involves the opening of a multi-universe portal by Spider-Man nemesis Kingpin which, after the original Parker is smashed into by a gargantuan Green Goblin, flashes in Spider-characters from a whole bunch of alternate planes. Their existence is however ephemeral unless they return to their own planes and the collider is destroyed, all of which needs to be done by Miles...once he gets a hang of how to control his new powers, that is.

So yes, the narrative is a wee bit over-packed, and doesn't have the space to explore its full multi-universe potential, but it works well most of the time, and the banter between Miles and another universe's Peter B. Parker forms a linchpin of companionship and character-building upon which the rest of the film rests.

Visually, 'Verse is an amazing trip that uses almost every color in the known spectrum. The animation is also unique, often resorting to a halved frame-rate to give the image a crisp still quality that looks like pages from a comic book. Supplementing this is the use of onomatopoeic verbiage, including thought bubbles and on-screen representation of a multitude of sound effects a la the Adam West Batman series. According to the makers the attempt was to make every freeze-frame look like a comic page or a work of art, and it works. For sheer eyeball-melting eye-candy, this tops most superhero films you know. With all their limitations of access to the character, Sony put out possibly the best Spider-Man feature film made thus far.

While I'm sure people with access to 4K and HDR will have an even better experience, the 1080p blu-ray also gives a topnotch presentation, incredibly colorful and texturally rich. 'Verse is a film that can be re-visited several times purely to admire the wizardry of the artists involved in the making. The 5.1 audio track sounds bombastic on my home surround, a heck lot better than some of the under-powered MCU blus (looking at you, Thor: Ragnarok). Of the extras, I watched all the featurettes, and they are decent though not significantly in-depth (I think they auto-play after the main feature). There is also an audio commentary and an extended version playback of the film, which inserts or discusses differently conceived scenarios and concept art elements.
Posted by Suresh S