If I correctly recall my school lessons, Vanaprastham in ancient Hindu scripture literally means "retirement into the forest". It refers to the phase of life when one gradually dissociates oneself from the affairs of the world - possessions, family - and becomes more spiritually inclined, in preparation for Sanyasa, the phase of complete renunciation and asceticism.

But what does this have to do with Kunjikuttan (Mohanlal), the sad-eyed protagonist of Shaji Karun's ravishingly mounted poetic drama? Kunjikuttan is an exponent of the operatic artform Kathakali, a star on the rise. When the film begins we hear that he is graduating from female parts (he portrays the demoness Putana, known for trying to kill the god Krishna in his infancy, by suckling him with her poison-tainted breasts) to heroic male leads - he is slated to play the  Mahabharata's famous warrior Arjuna. But Kunjikuttan is also a tragic figure. Born of an illicit tryst with a lower-caste maidservant, his father refuses to acknowledge Kunjikuttan, even though he is also his rigorous mentor in the Kathakali discipline. All through his youth, Kunjikuttan has yearned for a father's affection, for the identity it would give him, and always it has been denied because of his mother's lower social status. 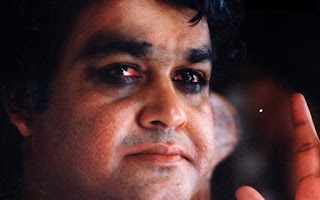 Even as an adult with his own family Kunjikuttan feels the loss; it is reflected in his perennially distant gaze. His marriage is an empty shell, only his little daughter bringing a spark of liveliness in his face. Kunjikuttan's art is his sole raison d'être - against the red glow of the flickering oil-lamps, under the layers of traditional make-up and costume finery, escaping into an entirely different character is when he lives rather than merely exists.

The second act of the drama of Kunjikuttan's life begins when his role-playing of Arjuna is attended by Subhadra (Suhasini). A high-born erudite woman of literary persuasion, Subhadra is the niece of the local diwan (landed nobleman representative of the ruling class). There is an innate double entendre in this: The Subhadra of mythology is the consort of Arjuna and the mother of his celebrated son Abhimanyu. Our Subhadra too is smitten by Arjuna; apart from entrusting Kunjikuttan with her own libretto for the famous episode of Arjuna's abduction / rescue of his consort, she also pulls him straight from his Arjuna performance into her boudoir. After their love-making, she exults in smearing the colors from his make-up on her face, while he quietly slips out like a thief into the night.

This courtship also marks the end of their affair, because Subhadra has no feelings towards Kunjikuttan, the lower-born Kathakali performer. Her eyes are only for the mythical Arjuna. She shuns his attempts to contact her, and even the son born of their one-night stand is shown to him only once (Subhadra's moneyed status in old Kerala's matriarchal society means she does not need a husband to rear her son). Kunjikuttan's caste thus robs him also of the identity of father to Subhadra's child. His soul torn apart at these repeated betrayals, Kunjikuttan turns away from hero parts, preferring to play demonic characters that mirror the rage within him. Time moves on, seasons change, people around him grow older or die, his own head grows gray, but the void within Kunjikuttan remains; he is neither the son of his father nor the father of his son. He decides that there is but one way to resolve the situation. He must stage Subhadra's libretto in which he will for one last time return to the role of Arjuna. 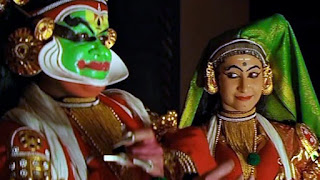 Those who have watched Shaji Karun's previous films like Piravi and Swaham will know what to expect - a languorous reflective journey with feet placed in the boats of past and the present. Vanaprastham is something of an epic project in Karun's career - a co-production between Indian and French studios, it has apart from Malayalam cinema superstar Mohanlal, an international behind-the-scenes crew (the gorgeous cinematography is by Santosh Sivan and Renato Berta while editing duties are shared between Sreekar Prasad and Joseph Guinvarch) and is scored by the acclaimed classical music maestro Zakir Hussain. Thankfully, all of this does not add up to a tiresome prestige piece. While Mohanlal does not seem entirely convincing in the performance segments (it takes several years of practice for an actual Kathakali practitioner before he/she can ascend the stage), he anchors the tragic arc of Kunjikuttan's personal life with a restraint that is evocative; In his soft-spoken words, in his silent stares we feel the pain of a rootless man. This Vanaprastham would seem to be for one who has renounced the hope of having an identity in this world.
Posted by Suresh S