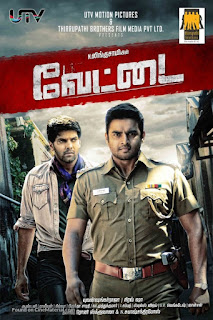 Vettai's plot about two brothers, one timid and the other foolhardily brave, was potentially interesting as masala entertainment. Madhavan as the timid elder one becomes a police officer after he is goaded by rogue sibling Arya, and gets posted in a town where lawlessness runs rife. The brothers have an arrangement where Arya ass-kicks all the bad elements and Madhavan gets credit for it. The entire basis of such an arrangement is supposed to be the loving bond between them. This is however sketchily conveyed, with Arya getting almost nothing from the deal. Madhavan doesn't especially acknowledge him in private, and does not even come to his defense when his haughty wife labels Arya a loafer mooching off her "braveheart" husband.

The wife is played by Sameera Reddy, with Amala Paul as her sibling. These two are introduced in song as a super-spunky pair who send suitors packing because they don't settle for just anybody. Except, when Arya comes with Madhavan's proposal, they don't even feel the need to meet the actual man before accepting the proposal. Make up your mind ladies, liberated or not? It's still interesting that the initial encounters are between Arya and Sameera in a series of feuds that you think will set them up as a romantic pair, but they end up as devar-bhabhi (siblings-in-law). The main baddie is a dubbed Ashutosh Rana doing a stereotype tamil movie villain role, 'nuff said. This guy is so thick-headed he makes Prakash Raj in Wanted look like a genius.

While there are occasional thoughtful touches and winking nods to popular Tamil cinema, the major problem with Vettai as a movie is that for its butt-testing 2.5hr length there are no surprises and no tension. Arya is so badass he can beat up dozens of goons alone. At one point in the film, Madhavan's character undergoes a transformation that with a quick training montage converts him into an equal badass. Every encounter has a foregone conclusion, which makes the film a chore to sit through.
Posted by Suresh S