Godha (Arena, the subtitles translate) is what Ali Abbas Zafar's wrestling movie Sultan would be like if it had not been Bhai-cotted. This is another story where an aimless youth Das (Tovino Thomas) falls for an aspiring wrestler Aditi (Wamiqa Gubbi) who would rather focus on her ambition. Initially Das is instrumental in Aditi running away from her orthodox brother in Punjab to become his dominating wrestler father's newest disciple. But her single-minded devotion to her craft makes him feel betrayed, until a tongue-lashing from her and his dad force him to get his priorities in life straight. He then revives his interest in wrestling, a sport he had abandoned long ago.

In Bollywood and Bahubaliwood this would have been the cue to shift the focus entirely over to the macho hero, with the girl taking a supporting part, marveling over his newfound awesomeness and discovering lurrrrv. But Godha is primarily Aditi's story, and while Das gets his spotlight moment of slow-motion running with blaring guitar soundtrack, his arc remains secondary to hers; even at the end the nature of their chemistry is ambivalent.
The other major character is Das's father Captain (Renji Panicker), a former mat champ frustrated at the lack of respect for the sport in current times, and seeing in Aditi a rare chance to mentor someone as dedicated. His favoritism towards Aditi extends to banning non-vegetarian food at the family dining table and insisting that his wife make paneer to please his vegetarian protege; the script always plays this for laughs, ignoring the dramatic potential for this encroachment on his affections. Towards his own son Captain's behavior is at first so blindly authoritarian that the rapidity with which he becomes an understanding life-gyan dispenser after Das is verbally whupped by Aditi, is a little jarring. Aditi's own behavior in her initial interaction with Das is somewhat schizophrenic, but there's a lovely single-take scene in which she opens her heart out to him about the pains of being an out-of-place girl sportsperson in a man's world, which explains at least some of her attitude. 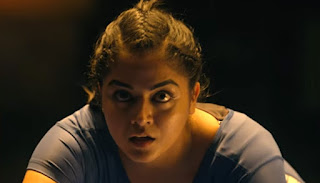 The drama is peppered with a fair amount of slapstick humor, most which comes from the local lads' fascination for the "fair-skinned northie girl". It's not sublime comedy, but not intolerable either. Then there's the wrestling. Sadly, Dangal, which came before this, set such a high standard for authenticity in a wrestling movie that Godha just doesn't match up. Aditi is given a cardboard nemesis in the form of Pinto, a dread-locked wrestler from Delhi (if Pinto had been shown to be a Malayalee, it would have at least made for an interesting juxtaposition). Apart from playing unfair on the mat, Pinto repeatedly baits Aditi, even challenging her to a "Where you want, when you want" bout that makes Aditi's win on a home-crowd supported ground less of an underdog story. There's an unconvincing bit about the brother attending her bout and cheering her on when she needs it (there seems no reason for him to have had a change of heart).
Posted by Suresh S