My opinions of the Hrishikesh Mukherjee classic Anand have been conflicted. While the first time I was wholly in its thrall, laughing at the funny moments and bawling at the climax, I later harbored a growing resentment at the idea of a dying man devoting his remaining time to being an interfering dick in other people's lives, and playing the sympathy card because he's dying. At least Anand is the happy kind of dick (and that climax still works). 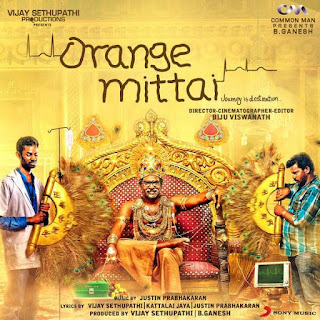 Orange Mittai's Kailasam (Vijay Sethupathi, who also co-wrote and produced) is a more difficult kettle of fish. In the beginning we see him as an opportunistic hypochondriac. He's lonely, and by default bitter and sarcastic to everyone around, but the moment he is given an inch of sympathy by the EMT nurse Sathya (Ramesh Thilak, thankfully in a better age of cinema than when he would have been reduced to Hero's Friend parts) he wants to butt into the guy's personal life.
Like the candy, Orange Mittai the movie promises to be a short sweet-tart experience. In actuality it's 100 min running time feels almost twice as long. And maybe it's just me, but I would question the judgement of any medical worker who chooses to ignore the call of his supervisor to reach an emergency site and remain as an emotional support to a whimsical, cranky old man who insists on stopping in the middle of the road to pull off a 'mass' dance routine (a scene that goes on for way too long). There are occasional poignant moments, like towards the end when Sathya hugs Kailasam after dropping him near his residence, and the latter reacts with stiff discomfort, like someone wanting affection but awkward when receiving it. But the film doesn't earn its demands of your attention (with its dumping of multiple epilogues, the editing is clumsy) and doesn't reward you with sufficient depth of character to make up for the annoyance caused by the assholery of the attention demanding old crank.
PS: Apart from Sethupathi and Thilak in the leads, the movie has a bunch of cameos from the Soodhu Kavvum cast.
Posted by Suresh S