Last night, me and mum watched this Malayalam movie called Helen, about the fate of a young girl (Anna Ben) working part-time at a fast-food outlet, who gets locked inside the walk-in freezer at closing time. No one knows she's in there, and for reasons, people including her widower dad (Lal) think she might have run off somewhere. 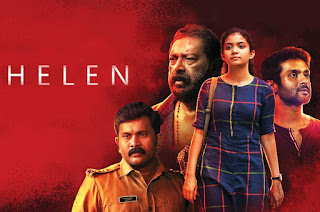 First off, the positives. What Helen is good at, is providing a credible look at how the girl deals with her predicament. She's not some superhuman survival nut that can duct-tape a bazooka out of a bag of frozen peas, but she's a trained nurse (her server job is a stop-gap earner while she takes English lessons and applies for an overseas posting) and applies her knowledge and natural quick-wittedness to use materials at hand to devise solutions for keeping alive. A good deal of thought seems to have gone into depicting the various phases of her hypothermic ordeal. Helen's actions while she is trapped are organic: they're not always the best choices, but you can appreciate her thinking in a desperate situation. 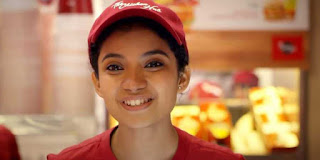 The script is however not perfect: The commercial compromise of a 2-hour film instead of a taut 80-90 minutes means we are subjected to a lengthy (half hour) prologue to establish what an absolute sweetheart Helen is, spreading joy and cheer, and acting as a gentle corrective rudder to both her father and her boyfriend Azhar (Noble Thomas, who also wrote the film). This is the stuff that would have worked better as quick flashbacks during her crisis. Administered as a concentrated dose at the start, it suggests that the makers were worried that the audience wouldn't empathize with Helen's plight if she wasn't shown to be all sweetness and light. There's also a longer than necessary sub-plot about a sleazy cop (Aju Varghese) who stonewalls the investigation into Helen's disappearance just cuz.
These cliches notwithstanding, Helen is a decent family-friendly experience and Anna Ben has a natural charm that carries the film.