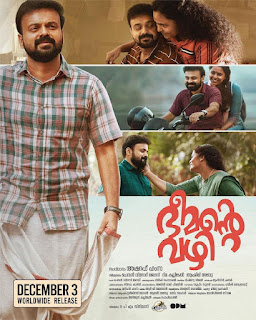 In Bheemante Vazhi, Bheema aka Sanjeev (Kunchako Boban) is a bachelor living in the village with his aged mother. After an incident in which he had to struggle through convoluted narrow lanes to get her to hospital, he takes on the mantle of getting a road through his neighborhood. This requires him to obtain permission from all the neighbors to allow part of their property to be used for the road, and adhere to the necessary bureaucratic protocols necessary to get the job done.

But the movie is not just about our hero achieving this task. It is also about his personal life - specifically, his outlook on sex and romance, and his phobia to commitment in a relationship. When the movie begins Bheema is in a regular sexual equation with a girl neighbor. When she gets a proposal, he is the one who smooths the way for her marriage, even if later he remarks to his BFF Maharshi (Chemban Jose Vinod) about the unemotional way in which women change partners. Later, he forms a deep mutual attraction with a Kannadiga railway engineer Kinnari (Megha Thomas). But when, prior to embarking on sex, she talks about marriage, he backs off immediately.

Bheemante Vazhi is remarkable in how liberated it tries to portray itself. Especially considering the insular rural setting, the attitude towards the female gender is incredibly forward. Except for one representative villain Kostheppu (Jinu Joseph) who makes lewd remarks at women AND puts various obstacles in the matter of the road-building, women are treated without prejudice. They can guzzle beer with the menfolk at the local bar or have casual sex without society chee-chee-ing them. It's a nice wish fulfillment exercise, even if it doesn't seem to mirror the reality of small town India (I would love to be corrected about this, if anyone has a perspective they want to share).

Bheemante Vazhi has a pleasant, unhurried beat and mostly likable characters. It however doesn't take enough trouble to keep the details of Bheema's mission interesting. Some of the technical and bureaucratic hurdles Bheema faces are not explained clearly and it became a little hard to comprehend the sequence of events in that regard. Problems arise and are sorted in a very deus ex machina fashion. The climax doesn't make much sense - if beating up the bad guy solves the legal problems, it could have been done a good while back. Also the manner in which the film resolves Bheema's Lothario status at the end ignores some of the beautiful character writing up until that point, and just feels cheap and random.

While not as well-worked out as it should have been, Bheemante Vazhi is, with sufficiently tempered expectations, a watchable enterprise.