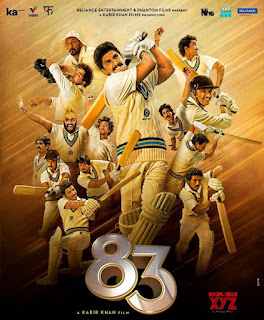 If  despite all of Kabir Khan and his team’s missteps, ’83 - the story of how the Indian cricket team under Kapil Dev's captaincy went from being complete underdogs to reaching the finals and defeating champions West Indies (WI) to pick up the trophy and forever change the future of the sport in India - works as a sports drama, it is because of the incredible true story behind it.

The screenplay (Kabir Khan, Sanjay Puran Singh Chauhan and Vasan Bala) defines lack of focus. If they were trying to tell the story of India’s entire journey through the World Cup, it should have been an ambitiously mounted miniseries, India's answer to the Bodyline series, which we adored as kids. Or if they had decided to make a feature film, they should have done better than a collage of mostly rushed moments that do not give the epic build-up the narrative deserves.

For instance, they could have begun with the knockout match against Zimbabwe when India was at its ebb, and the manner in which Kapil almost single-handedly brought back the team from the brink of ignominious defeat, inspiring them to become the world-beaters they did. A gutsy film-maker would even have considered capturing the Zimbabwe game alone since it was also the sole unrecorded match in the '83 World Cup (due to the BBC being on strike that day, and most of the press being at the WI-Australia game). In the bid to cram in every match India played in that series, the games are reduced to highlights on steroids; there is no build-up or flow in their depiction.

Star Ranveer Singh makes an impact with his uncanny ability to absorb and emulate Kapil Dev’s persona. I must admit here that I am not per se a cricket fan, but as a kid the handsome toothy open-faced persona and flashy playing style of Kapil Dev would attract me enough to sit down to watch a cricket match. The two dialog scenes that really stood out for me are a) where Kapil vents about how the one thing that makes him angry is people’s lack of expectations from India, and b) when Krishnamachari Srikanth (Jeeva) gives a speech about the ‘mad’ captain who actually thought they had a chance to win this series when no one else did.

There are the occasional field action segments when the film takes a moment to focus, and provides some delights. The  depiction of the Zimbabwe game, while still too truncated, gives a taste of what could have been. When Ranveer's Kapil gives us his iconic Nataraja pose while slamming the ball all across the ground (and smashing several window-panes and even windscreens of cars parked outside the stadium), it is hard not to feel goosebumps and lumps in the throat.

While it would be foolish not to expect a grand show of patriotic fervor in one of the country’s most significant sporting moments, there are scenes where this goes into puerile jingo: For example, the Indian team sitting in their bus after being thrashed by the Windies in their second encounter burst into happy tears seeing a lone Indian flag waved by a kid, and I am not sure the armed forces appreciate being represented as people who are caught unawares by shelling while glued to the radio for cricket updates. Even considering 80's hair, some of the wigs are awful, and there are some really cringy homages, like Mohinder Amarnath playing his own father Lala Amarnath, Kapil Dev playing a spectator cheering himself (what was that about?!), and a cloying reference to a child Sachin Tendulkar.

Thankfully the real life legend manages to overcome these glaring potholes and one is still glad that a new generation of Indians (and sports fans in general) can relive one of the great cricketing moments in Indian history, one that, beyond the sport itself, forged a nation more confident in its own worth.