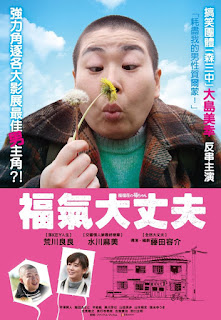 Yosuke Fujita's movie Fuku-chan of Fukufuku Flats seemed like it could be an interesting entry in the laidback whimsical movie mold, like Katsuhito Ishii's The Taste of Tea, which I enjoyed a lot. The story revolves around Fuku-chan aka Fukuda (Miyuki Oshima), a shy and pudgy bachelor that lives in a blue-collar apartment complex and makes a living as a wall painter. Fukuda's single status is worrying his closest friend Shimacchi (Yoshiyoshi Arakawa) who keeps trying to arrange matches for him. These attempts are firmly rebuffed by Fukuda, otherwise an easy-going and good-natured person that quickly makes friends, even with decided oddballs like the neighbor with a python and another who is constantly visiting shrines as penitence for having once been a panty-stealer.

One day Fukuda meets the woman Chiho (Asami Mizukawa) who in the past had done him a wrong that scarred him for life, but is now determined to make amends for her mistake. The rest of the film is about how the friendship between Fukuda and the woman is gradually nurtured, and the change it brings into their respective lives and the people around them.

The ingredients are there for a modern Ozu-like feature with some surreal elements. But while The Taste of Tea captured a wonderful souffle like delicacy, Fuku-chan... falls below those heights; the relation between Fukuda and Chiho is handled with less skill, showing a more turgid sentimental touch, which never feels truly earned. Some parts, like the curry house episode in which they are almost murdered by the curry house owner simply because they asked for water to quench the hot curry, feel bizarre for bizarre's sake.

Still, most of the film is sufficiently watchable to recommend this on the whole as a relaxed one-time diversion. Curiously enough Miyuki Oshima, the lead actor playing Fukuda is actually a woman, with her hair cut really short and wearing men's clothes. Perhaps the director felt she had the right face for the part, even though she is not very convincing as a male.