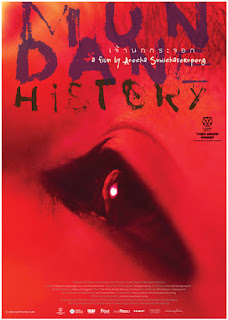 The work of Apichatpong Weerasethakul casts a long shadow on Thai arthouse cinema, and Anocha Suwichakornpong's 2009 debut feature Mundane History certainly owes some debt of inspiration to him.
The film is centered around Ake (Phakpoom Surapongsanuruk), a youth paralyzed from waist down, and Pun (Arkaney Cherkam), the male nurse employed to take care of him at home. The other significant characters are Ake's father, who is considerate yet distant from his son, and the family members / domestic staff.
Ake has the simmering frustration of a youth whose entire way of life has been snatched away, reducing him to someone that needs help with his most basic needs. He also feels emasculated by his inability to sense any sexual pleasure, as demonstrated in the scene where he masturbates in the bath to no effect (a scene which was probably instrumental in earning the film the Thai censor board's strictest age rating 20+). This makes him taciturn and indifferent / rude to the people around.
Pun at the beginning of his employment feels lost. He is a friendly, open-hearted person and the hushed sombre atmosphere of the house wears him down - he confides to an acquaintance on the phone that he finds it "soulless". But as he diligently works with Ake and shares his own thoughts with his patient, a bond develops between the two young men - they are of the same generation and find common ground in their interests. Pun provides Ake a companionship and affection his own father seems afraid to show.
Mundane History is presented in subtle non-linear fashion where at different points back and forth in time we see the outlook of Ake and Pun, and their interaction with each other. This non-linearity is not an essential device for telling the story, but does prevent it from following a cliched path, and more importantly, allows for time lapses where more can be left to the viewers' imagination.
It is not clarified what mishap led to Ake's paralysis, or at what point the estrangement between father and son occurred - was it caused by Ake's accident and subsequent disability, or whether it predated that? Beyond a point, the film is less interested in the emotional drama (the tone is tamped down throughout, neither anger nor joy are given showcases), and becomes more of an overarching poetic reflection on the rhythm of life (even incorporating the depiction of a caesarean section birth). I didn't find this meshing as organic and magical as in my favorite Apichatpong film Uncle Boonmee Recalls His Past Lives, but it is done well enough and does not overstay its welcome.
A few words on the Second Run DVD:
The DVD came out in 2012 and gives a decent though not particularly stunning presentation. Most of the film is shot in a naturalistic manner with lots of static camera settings, that are not necessarily the most picturesque. There is noise, especially in darker scenes, but I would assume that to be endemic to the source material. Audio comes in Dolby 2.0 and 5.1 options, the latter slightly expanding the ambient sound field for the world around Ake, and giving more body to the occasional music score. Extras include a conversation with the director discussing the film's genesis, making and its reception, and a previous short film by her called Graceland, which is visually more striking but with a sketchier narrative. As customary with Second Run, the release includes a booklet with an essay.
Posted by Suresh S