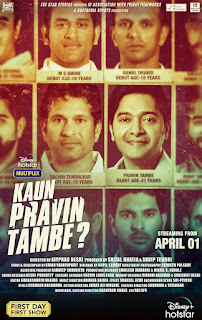 So I saw Iqbal Part 2. Oh wait, it's called something else, but Shreyas Talpade is playing another underdog trying to make it in cricket. This is the story of a real life guy called Pravin Tambe, a club cricketer in Mumbai who persevered in honing his game in all his spare time even though he was not selected for any national level tournament up to his 40's, which in most sports is when people start to talk about retirement. He finally got to play in the Indian Players' League, where he made enough of a splash to garner notice and have a movie made about his life.

Kaun Pravin Tambe? (KPT?) does not have the production value of an '83 (reviewed HERE) or the M.S. Dhoni biopic, and the scope is a lot smaller. There are some nice Sai Paranjpe style touches in depicting the Tambe family's lower middle class life in a chawl type society - when Pravin and his brother get married together, they have to draw lots to see who gets the 'bridal suite'. The film also looks at Pravin's struggle to keep up various jobs while he still tries to sneak in some play time - In one instance he is strung along with promises of making a company cricket team to work for cheap by an employer who has no actual intention of actually doing so.

The film also highlights how the sport outside of the more glamorous tournaments often offers meager incentive for the players. Talpade has some fine scenes in which he expresses his character's despondence, and the talented Anjali Patil (Newton) does the best she can as the spouse who loves her husband but is also frustrated with what she feels is his lack of prioritization towards his family.

But even when KPT? eschews the usual patriotic jingo of Indian sports movies (likely because Tambe never played for the country as a whole), the script is still formulaic and most of the characters are etched in very broad strokes. Parambrata Chatterjee as the sneering sports journalist Sanyal is handed a one-note part that does not do the actor sufficient justice - I know that Sanyal's scorn towards Tambe is driven by his envy, but there should have been a more nuanced portrayal instead of making him a stock villain till short of the end. Also, the background score (credited to a Sai-Piyush) is near-constant and unsubtle.

But if you like cricket in general or the idea of a Readers' Digest type slightly saccharine inspiring story, I thought KPT? was better than those bigger-budget cricket movies.