A review of 2014's Song of the Sea, which I had first seen 5 years ago, but recently re-watched. 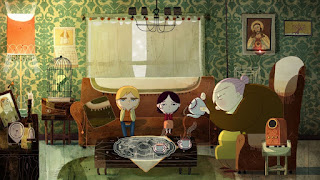 I haven't seen his previous entry The Secret of Kells, but with this film alone director Tomm Moore shows himself to be an Irish Hayao Miyazaki, with similar sensibilities towards nature, mythology and cultural heritage. In this wonderful fantasy, a Selkie (a mythological creature that can transform between human and seal forms) marries a human - a lighthouse-keeper on an island off the coast, but leaves him after the birth of their second child. The man is rendered a depressed shell and the older sibling Ben blames his new sister Saoirse (pronounced Seer-Sha) for the loss of his mother. Their paternal grandmother, insistent that a lonely island is no place to rear children, forcibly takes them to her home in the mainland city (the puffs of black smoke from her automobile, and the crowd and noise of the urban environment indicate where the director's proclivities lie). In the midst of this, Saoirse, who has not spoken since birth, is discovering her latent Selkie abilities. 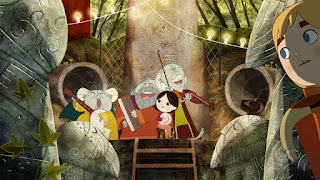 This story is linked with that of an ancient legend of the giant Mac Lir who once cried oceans for a great sorrow, which his mother Macha the Owl Witch addressed by draining out his emotions, in the process turning him (and most of the faery folk) into stone. Saoirse is kidnapped by Macha's owl minions and Ben must now work to rescue his sister (and eventually free the faery folk from their stone husks and allow them to return to their mythical homes).

Song of the Sea is a 2D animated venture that uses the flat dimension as an artistic tool, placing the characters against impressionistic fantasy backdrops, giving each frame of the film the look of a gorgeous painted illustration. Colors are masterfully used, whether it be the muted natural shades of the island locale or when they run riot in the fantasy realm. The soundtrack (Bruno Coulais with Irish band Kila) has some haunting Celtic melodies that are an integral part of the narrative. The characters and their adventure elicit the same degree of emotional response as Miyazaki classic Spirited Away, and I would highly recommend this to all Miyazaki fans. 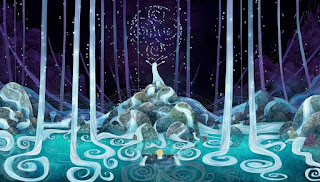 For those interested, a few remarks about the UK blu-ray from Studio Canal:
It provides a gorgeous 16:9 image that pleases from start to finish. Like I said before, you can pause the film at any point and have a ravishing painting facing you. There are options of 5.1 DTS-HDMA audio in English (default) and the native Gaelic (HOH English subtitles are available). Even in the English version, the songs are in Gaelic and there is occasional use of Gaelic phrases, so you may want to keep the subs on for the first time you watch the film. The audio is not as boom-bang as Disney-Pixar productions, but uses the surround channels to provide a welcome buffer.
Apart from the commentary, the extras are brief, with a behind-the-scenes, animation tests and a concept art gallery. The US release from Universal seems mostly identical (except for having French audio in place of the Gaelic track)