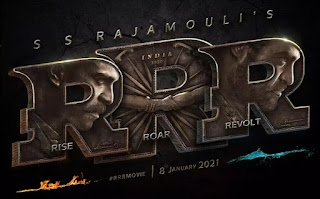 It is, I suppose, a curse of the pan-India movie paradigm that even the titles must be generic for the sake of universality. So they either use proper nouns, words that mean the same across multiple Indian languages, or, as in the case of Eega wunderkid Rajamouli's latest project RRR, reduce the title to an acronym that expands differently in different tongues. That said, with RRR I wonder if the bulk of the audience is even bothered to be acquainted with the expanded forms in the different releases. It might as well be just an echo of the manly growls that permeate this picture.

And there are manly growls galore. Each of the film's two male leads - Ram Charan and NTR Jr - gets a massive introduction sequence in which they are established as forces of nature. Rajamouli distinguishes his heroes with fire and water motifs respectively, even announcing these in on-screen titles, just in case anyone in the audience missed the metaphor. The film drips with so much machismo, it was a missed marketing opportunity that they didn't have promotional 'mandles'.

While RRR is making waves both in India and outside for its exaggerated action set-pieces and equally exaggerated bromance between the lead stars, it is by no means a novel concept. Bollywood masala mogul Manmohan Desai's Mard in 1985 showcased Amitabh Bachchan and Dara Singh knocking the stuffing out of British colonials with fisticuffs and the aid of a trained horse and dog. RRR's bad people, Governor Buxton (Ray Stevenson) and his wife (Alison Doody, the only woman in the film who makes an impact), would certainly be at home with the caricature British villains from Mard. Stevenson admonishes his troops for wasting expensive British-made bullets on lowly brown natives, while Doody complains about the lack of blood spurts in a public lashing. I imagine the spirit of Bob Christo would heartily approve of these doings. For some reason they're not mindful of a niece (Olivia Morris) that hangs about with said lowly brown natives and brings them for tea and dance dates to the gubernatorial palace.

Continuing with the Mard comparisons, RRR does not match up to that film's cheerful ludicrousness. Mard had cheesy S&M leather outfits, Mission Impossible type latex mask disguises, a baddie literally bleeding out starved Indian laborers while wearing a Hammer Dracula style hooded cape. But one really can't hope for that level of reckless imagination now.

As some measure of recompense, RRR boasts of a level of polish in the execution of its set-pieces that the technologically-slipshod-even-for-the-80's Mard could not claim. An applause-worthy level of detail is given to each of the film's action sequences, which are meticulously designed and painstakingly executed - Ram Charan fighting his way back and forth through a whole mob of protesters, him and NTR Jr forming a Goro-like fighting combo, the wild animal assault on the Governor's mansion. Right up to the ridiculously explosive climax, the film speaks purely in hyperbole. There are even some epic emotional moments like when NTR's character is getting whipped by Ram and breaks out into a patriotic song - say what you will, these guys put in their all.

But anytime the film moves away from them or the baddies, it stumbles massively. Alia Bhat barely registers as Ram's love interest, and Ajay Devgan as his father sucks the life out of every scene he is in, purely by being his Ajay Devgan self. Taking them out of the picture would have cut a fourth of the massive runtime and kept it fresher.

I certainly enjoyed individual portions of RRR, but Eega / Naan Ee / Eecha / Makkhi is still the one Rajamouli film I consider worth revisiting.