"The name's Benton...Don Benton." That doesn't really have the same ring, does it? 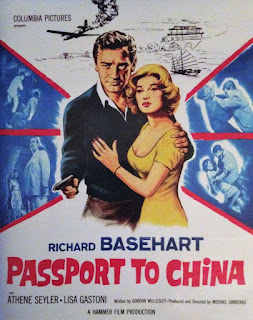 I was regarding Visa to Canton (US title Passport to China) as a charming low-rent James Bond knockoff from from Britain's Hammer Studios till I realized it was actually made two years before the first Bond film, Dr. No. Of course, Ian Fleming's famous superspy was already 8 books old in print, after his literary birth in 1953's Casino Royale. The debut novel in turn had an Americanized TV adaptation a year later, featuring a thuggish "Jimmy Bond" (Barry Nelson); incidentally, the suave hero of Visa to Canton (VtC) is an American.

Our hero Benton (Richard Baseheart, prefiguring Roger Moore's portrayal of 007) is a WW2 flying hero turned travel agency hotshot based in Hong Kong. Of course this being a Hammer production, all principal photography was done at their Bray Studios in Berkshire, and the few glimpses of actual Hong Kong in the film are either second unit work or stock photography. Benton is the "can do" man whose assured manner and silver tongue smooth over all obstacles. Apparently, his PR skills are so good the CIA wants to recruit him for a secret mission involving a downed aircraft on the Chinese mainland. Benton turns them down, but changes his mind once he realizes that the mission involves the rescue of a relative, in fact the pilot grandson of his adopted Chinese family (yep, you read that).

In a Bond film, this infiltration would have been a significant early action set-piece. But Michael Carreras' talent for spectacle and Hammer's budget are modest. There are no difficulties for Benton's crew in the search, and the Chinese soldiers they encounter are so inept and lackadaisical, even in a slow-moving motorized canoe, they easily escape their pursuers. 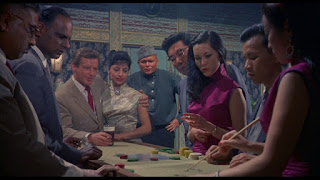 But there's more in store. The rescued pilot (Burt Kwouk) stands accused of having helped in the capture of a CIA informant who was a passenger on the downed flight. Benton decides to go into China again and find the truth to save the honor of his Chinese family. In this adventure, he comes up against lovely Lola (Lisa Gastoni), the informant who carries in her head vital information about a super-weapon, and the Russian origin smiling viper Ivano Kang (Eric Pohlmann, channeling Sydney Greenstreet from The Maltese Falcon).

These elements generate the most potent Bond-like atmosphere. Lola's sultry posing in Benton's hotel bedroom is an almost archetype Bond girl appearance. Kang's oily menace is echoed in many of Bond's supervillains and he has a notable Henchman in India-born Milton Reid (who later memorably tangled with Bond himself in The Spy Who Loved Me). Composer Edwin Astley's brassy score is a precursor to Monty Norman and John Barry's work on the Bond movies. This is not to say those films aped VtC; Fleming's novels already dictated their style. But Hammer's film did set a precedent for that spy adventure template on the screen. It even ends with a "possible next mission" coda (but not with a kiss). 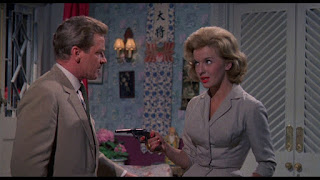 There are some now-cringy bits, like Caucasian actors done up as Chinese speaking pidgin English, but VtC is still more egalitarian than other "exotic East" movies (including Hammer's Terror of the Tongs, which had been constructed around the same time and using the same production material to share costs). At least the film does not uniformly paint Asians as slit-eyed evildoers. Benton is a grateful part of the Chinese family that sheltered him in difficult times and sees them on equal terms. The thrills are modest but the film has a likable smoothness. If VtC had more spectacle, more vim, more chutzpah, it could have made a bigger impact on audiences, perhaps even offset the dominance of Bond as cinema's premier globe trotting spy.