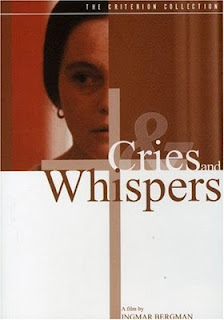 The amazing thing is not that Bergman takes us through nearly 10 minutes into his film before the first line of dialog is uttered. What's amazing is that, using a masterfully conceived collage of shots he establishes the setting, the theme and – by way of the clocks doling out second by measured second – the innate rhythm of the entire film in a more convincing way than reams of exposition would have.

Agnes (Harriet Andersson) lies in the last throes of breath, gritting over the pain of her illness, looked after by her married sisters Karin (Ingrid Thulin) and Marie (Liv Ullman), and more so by the devoted servant Anna (Kari Sylwan). The interaction between these characters is delineated by their respective actions and subtle responses towards each other. Agnes by virtue of her illness is unmarried and housebound, her innocence least victimized by the monster of civilized society. Both Karin and Marie are choked with the ennui of crushingly mundane relationships, being maintained rather than cared for. This makes for an interesting element wherein two women of disparate personalities are faced with a similar situation and their reactions are tracked. Karin hardens herself to a monk-like austerity aversely meeting even the slightest gesture of affection. The softer and wistful Marie gives way to an affair that only adds to her loneliness in its consequence. The servant Anna has lost her only child to a consumptive disease. 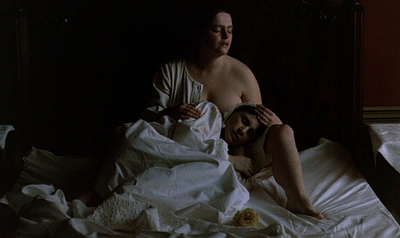 These events are shown, not in the way of a continuous saga, but as a series of flashback friezes book-ended by the frame dissolving into a primary red. This vivid red ironically seems to denote the colorlessness that dominates the lives of these characters. Agnes is dying, but the others are already `dead'. They are more animated corpses fulfilling the physical characteristics of life. The only time they seem to come alive is when they're attending to Agnes, washing and brushing her, reading to her, soothing her agonized wails. It makes for the sole moments when the sisters can bond oblivious to other influences, and Agnes' childlike dependence reverts Anna to motherhood otherwise lost. It is then an intense experience for them and for us to see death as it approaches Agnes, and to be reminded of their own meaningless existence that is a kind of death in itself. What follows then is the inevitable: Agnes's death confirms their irreparable acceptance of their own respective deaths as they return to their old lives (the momentary scene of emotional reconciliation between the two sisters makes for the sole false moment in this uniformly tragic piece). As for Anna, what happens to her is cruel but inevitable since Agnes' death means the loss of her `child' and her own purpose of existence: she too is a corpse.

This is an ultimately morbid story and Bergman is not himself unaware of it as seen from the tragic irony of the scene where he brings in Agnes' ghost only to have her `dead' sisters shrink away from her.

Here then is a brilliant study of death and living death.
Posted by Suresh S