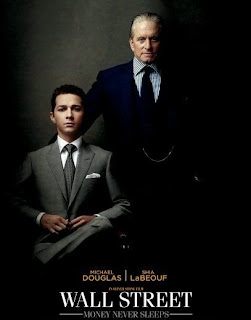 ...but you might, trying to get through this boring movie. The original Wall Street was smart and gripping but this one plain doesn't work. Shia LaBoeuf garners a lot of the blame. He's a complete cauliflower of an actor, utterly devoid of personality. Why does he even get roles, let alone leads? In a movie where you're required to see from his character's POV and empathize with his feelings, this is a major FAIL.

It also doesn't help that the character itself lacks meat. Charlie Sheen's arc in the 1987 film from desperate cocky pup to someone who is himself horrified at how low he can stoop to soar in the cutthroat financial world made for interesting viewing. Here, the character's ridiculously contrived motivations do nothing to efface LaBeouf's milksop bearing. Most of the other roles too lack any real depth or interest. Josh Brolin's villain is underwhelming. Michael Douglas (who in old age is beginning to look more like his super-badass dad) slips back into financial lizard Gordon Gekko's skin with relish, and has some very quotable lines, but that well dries up all too soon. The depiction of the stock market crash and its impact is perfunctory and carries none of the vigor that Oliver Stone's previous film-rants have had. What good is a polite Oliver Stone, I ask? Lots of footage is expended on glossy shots of buildings and expensive parties without any of the resonance they may have had in the first film. In short, this is a sequel so tepid and featureless you wonder why they bothered to get it off the ground.

Also, Charlie Sheen's cameo stands alongside Arnold Schwarzenegger's appearance in The Expendables for embarrassment value. But Charlie Sheen was always something of an asshole so that's OK.
Posted by Suresh S