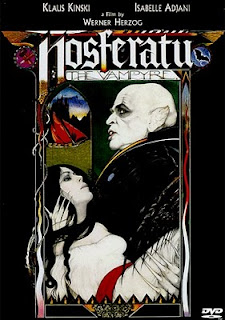 Werner Herzog's Nosferatu is primarily a tribute to the the 1922 Dracula adaptation by German silent film pioneer F.W. Murnau. Unlike Murnau who was forced to change the names of the characters in his adaptation of Bram Stoker's work to avoid copyright hassles (an unsuccessful move), Herzog is able to use the original names.

The screenplay while based on Dracula owes more to the script of Murnau's film than the source novel. Here, Jonathan Harker of Wismar, married to Lucy (yes), is sent by his employer, a man of dubious sanity, Mr. Renfield (yes, again) to Count Dracula of Transylvania to settle the purchase of an old house adjacent to Jonathan's own. Despite the warnings of locals and gypsies, Harker makes his way to the home of the Count, only to find himself in the clutches of a being more dead than alive. Dracula, enamoured by a photograph of Lucy, pushes forward the sale of the house and, trapping Jonathan in his castle, arranges to have himself transported as part of a shipment of soil "for botanical experiments". The arrival of the undead count brings forth a deadly plague on the townspeople, spread by his minions, the rats.

Meanwhile, Jonathan has escaped, but is a nervous and physical wreck by the time he reaches his beloved. Under treatment from Dr. Van Helsing, his recent turmoil is slowly beginning to change him. Dracula tries to blackmail Lucy into giving him some of the love she gives Jonathan, only to be rebuffed. In the end, she causes his death by making him forget the arrival of dawn as he feeds upon her, but is the sacrifice worth it? 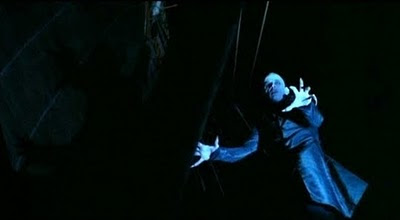 Although far more comprehensible, the movie reminded me to an extent of Carl Dreyer's Vampyr; both share a dreamy, predominantly sepulchral tone. The adventure elements of Stoker's story are severely pared down to strike a constant melancholic tone - Colors are muted, actions slow and deliberate, voices murmuring. It is also a visual film with long silent passages, every frame worth savoring for its sheer texture. Herzog's insistence on shooting at authentic outdoor locations – in scenes like Jonathan's journey to Borgo pass, the plague on the town of Wismar, the closing shot - makes for one of the most ravishing Dracula films made. Even the indoor sets and lighting have a marvelously tangible quality: It is like an exhibition of Gothic art.

Using the same getup as Max Schreck's Orlock in Murnau's film, actor Klaus Kinski plays Dracula as a repulsive rat-like being cursed with immortality, resigned to live through centuries of an unchanging futile pattern of existence. His vampire has no awe-inspiring super-powers and is no tail-coated seducer of nubile victims. You feel pity for him as he pushes towards dreary eternity, not able to die even if he wishes it. Aided by some evocative dialog, Kinski's performance is understated and credible. Also, I found it quite different from his swaggering lead portrayal in Herzog's Aguirre, the Wrath of God, testament to his versatility.

Given its sedate pace and obvious art-house moorings, this film is not recommended for all, and certainly not for impatient viewers or gore-fans. But this is one leisurely trip where the journey is its own reward.
Posted by Suresh S