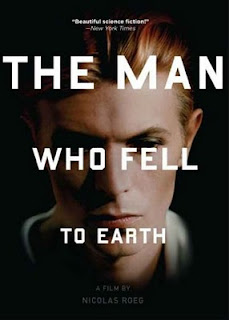 The Man Who Fell to Earth or TMWFTE (1976) can probably be best described as a psychedelic experiment in the same spirit that led to the progressive rock music movement of that decade. There's a boat-load of ideas - thematic and visual - that are flung right at you, and an audacious degree of artistic ambition...but also a pretentious indulgence that makes for a sometimes trying experience.

In probably the canniest decision ever, perennial cutting-edge rock star David Bowie is cast as an alien (there are those who would consider this a spoiler, but if you haven't figured it out from the opening scene and the title of the film, I could suggest some special school for you) who comes to earth with an agenda. Bowie, who was then in his Thin White Duke phase, brings a fragile otherworldly beauty to the part and is indistinguishable from his character. The outsider, calling himself Thomas Newton, makes his way to a patent lawyer with a bunch of inventions that will make him one of the richest entrepreneurs in the world. Once a mind-bogglingly successful reclusive billionaire ala Howard Hughes, he turns his resources to a gargantuan space transport scheme. 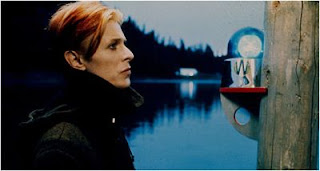 That's the bare outline, but TMWFTE is far from routine SF. Nicholas Roeg takes the theme and runs it through his style, giving the story a fragmented and often languorous dream-like feel. A single conversation may be carried out over a succession of scenes with different actors. Dialog serves more as a window into the emotional workings of the characters than as plot device. The depictions of Newton's austere home world, an Arrakis-like planet bereft of water (his mission being to carry water from earth, or something in that vein), are more symbolic than credible. Newton wants to save his family and world but, unlike the protagonists of a Jerry Bruckheimer film, is in no screaming hurry. When his space mission attempt is aborted by paranoid government intervention he gives himself up without protest to solitary confinement and the pleasures of dry gin. The allegory to a fallen angel is plain without being obnoxious. When it works, the film has a visual and narrative aesthetic that is stunning.

The film also builds its emotional moments from the interactions that Newton has with people, especially Mary-Lou (Candy Clark, bravely played), the earthy simple-minded woman he develops an intimate relationship with. We see these relationships growing and changing with time (the humans age while Newton doesn't) and circumstance. Roeg brilliantly uses sex as a means of conveying the tone of emotional make-up of characters and the relationships between them – the scene where Newton and a drained Mary-Lou make out, constantly shooting each other with blanks from a gun, is a more potent depiction of their falling out of love than any amount of exposition.

With all this goodness, the film also has its flaws. The leisurely pace beyond a point becomes wearisome. Even accepting that plot is not the be-all for the film, its flimsiness cannot be entirely ignored. But all things considered, this is still a solid example of the time when at least some directors got the opportunity to express their esoteric vision and films could take genuinely experimental “What if...” approaches.
Posted by Suresh S