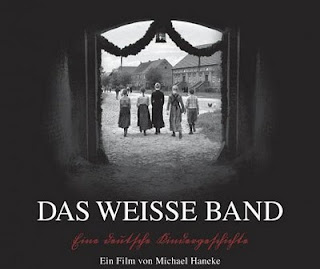 My response to the two Michael Haneke films I've seen prior to this was polar. I loved Hidden and was bored to tears by Time of The Wolf. This Palme D'Or winner falls a lot more in the former category, though with not as much enthusiasm.


The narrative is set in a pre-WWI German village where a series of unfortunate incidents disturb the peace of the local populace. The doctor is injured when his horse trips on a deliberately placed wire, a farm laborer's wife is killed in a sawmill accident, the landowning baron's son is assaulted by an unknown person / party...and so on. The piling up of these incidents brings to the fore the bubbling discontent and animosity in the hearts of the characters. It has the bare structure of a whodunit but there is no pressing hunt. The focus is really more on the brittleness and insecurities of the so-called modern society and the possible fallout of the massive amount of brain-washing that goes on to produce responsible patriotic citizens. Taken as a whole the film succeeds brilliantly in conveying this outlook.

White Ribbon is a little hard to recommend to all and sundry. It's definitely in arthouse territory, and takes its sweet time to build up the blocks of its premise. There are several similarities with the work of Ingmar Bergman - the immaculate B/W photography is highly reminiscent of Bergman's Trilogy of Faith, and a certain priest in the film will evoke memories of a similar character in Fanny & Alexander. The characters are however less nuanced than they would be in a Bergman film, and while possibly “correct” as a narrative device, it doesn't help that our view of the proceedings mainly comes from the statement of a character with the personality of a cabbage. But excuse these bits and you have a very nuanced and suggestive experience well worth the watch.
Posted by Suresh S