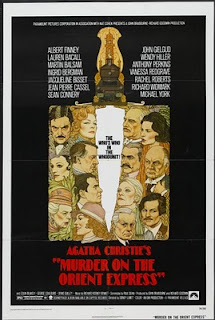 It is not often one hears of Sidney Lumet being regarded as a favorite director, even though several of his films are favorably recognized. Amongst all the showy geniuses and enfant terribles of movie-making, Lumet's understated studio-friendly style is perhaps a little too low-key. But check out the opening moments of his 1974 adaptation of an Agatha Christie novel from more than four decades previous and you will see why he should be better considered. Using a collage of newspaper clippings and silent film style footage set to a careful score, Lumet constructs the entire prologue of the film without a shred of dialog and with a chutzpah that in itself warrants looking at. Admittedly the remainder of the proceedings is more conventional, but for fans of the old-school detective drama the film is on the whole a smooth ride.

I have not read the Hercule Poirot novel upon whch the film is based. In fact, I have read only a tiny fraction of Agatha Christie's output, on account of a) the sheer volume b) the dissatisfaction with most of what little I had actually read. Her stories came across as a poor man's Sherlock Holmes, depending on such contrivances as make Arthur Conan Doyle's work appear totally grounded in reality. Besides, between us, Poirot was a pansy and Miss Marple a boring old bat. All the same, the idea of a bygone era murder mystery set on a train was appealing. 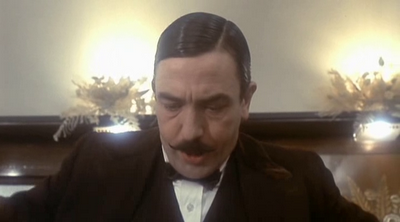 Barely managing to secure a berth on the luxurious Orient Express, Christie's Belgian egg-head sleuth has just settled in when an onboard murder figuratively takes the journey off the rails. When the train is stranded in a snowdrift, Poirot is implored by his friend and the director of the line M. Bouc to bring in his “little grey cells” to solve the crime before the train continues to the next station, at which the matter must be handed over to the police. This is followed by a series of interrogation sequences at the end of which comes a massive and hugely improbable denouement. 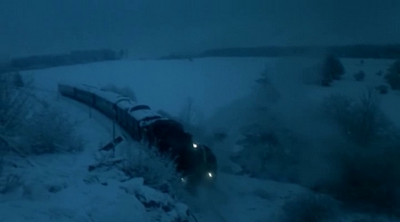 All of this of course suggests a movie with a lot of talking; and yes, it is. Lumet does his best to keep things interesting with his bevy of veteran movie actors each giving their character some or the other amusing quirk: Sean Connery is a tough Brit soldier with a woman problem, Lauren Bacall is an obnoxious nosy-parker, Ingrid Bergman is a missionary with a thick Euro-accent. When John Gielgud's valet of the classic type is questioned by his crude Italian co-passenger about the romance novel he's reading, “Is it about sex?”, he unflappably replies, “No, it's about 10:30”. Some obvious stereotypes are employed with a winking eye – Anthony Perkins as a neurotic mama's boy, who'da thunk it? Albert Finney as Hercule Poirot does a fine job, conveying the peculiarities of the character without going too far into comic territory. The last scene is of course his piece de triomphe, an alleged eight-page exposition delivered with an obvious actor's relish. As Roger Ebert's review states “...it's fun of a rather malicious sort watching a dozen high-priced stars keep their mouths shut and just listen while Finney masterfully dominates the scene”. 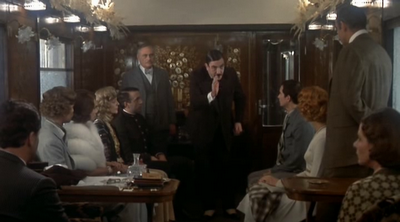 The production is a handsome one and the ornately furnished interiors of the titular train provide sufficient eye candy to efface the limitations of its lone setting. Lumet also breaks up the monotony with some splendid outdoor visuals (grand old Geoffrey Unsworth) of the train and the snowy mountainside along which it majestically chugs along. Like the Orient Express itself, the film carries all the pleasures of a well-oiled stately locomotive journey.
Posted by Suresh S